OF THE REPUBLIC OF GREECE


The fact that this decision does not involve expenses at the account of the state budget, we hereby decide:

We approve the hunting program on the island of Sapienza for the hunting season 2019-2020, as follows:

The hunting in the controlled hunting region on the Sapienza island requires:

To obtain special permission for hunting in a Controlled hunting region, the entity concerned must, personally or via legal representative, submit to the Forestry office of Kalamata:

The hunting days are: Tuesday Wednesday, Thursday and Friday.

The hunting starts one (1) hour after the sun rise and ends at 14:00 in the afternoon.

Those hunters who do not want to go hunting and have showed up on the day set for them, will be reimbursed the sums they paid by depositing / transferring from the bank account of the office to the accounts from which they have deposited / transferred, subject to calculation of expenses for bank transactions.

The use of mobile phones as support means for hunting are forbidden.

2.The hunting permissions and special permissions are submitted to the authorities of the Controlled hunting region prior to the hunting start and are returned afterwards.

The trophies of the collected male animals remain at the disposal of the Controlled hunting region and the Office.

Via a decision of the Director of Forests of Messinia, after an explanation by the Manager of the Forestry of Kalamata, the Hunting program may be changed or terminated at any time.

GAME ALLOWED FOR HUNTING - PRICES FOR THE GAME

The allowed number of animals and their export license prices of the game are given in the following table:

PAYMENT OF THE GAME VALUE

If for any reason, the departure does not take place by 8,30, the hunting should be consider canceled.

THE ATTENDANTS OF THE HUNTERS - VISITS IN THE CONTROLLED HUNTING REGION

1.The entry and stay in the Controlled hunting region without permission from the Forestry Office is forbidden.

2.The controlled hunting region may be visited for scientific and entertaining purposes, for studying and investigating the flora and fauna and the ecosystem as a whole as those who want to do this, can do it after obtaining a permission from the Forestry office of Kalamata in days when no hunting takes place. The manner, time, conduct and other duties in the Controlled hunting region shall be set in a special permission.

3.For the matters that have not been regulated in this program, which has the effect of a regulation for hunting, the general hunting provisions shall apply.

4.The violators of the regulations for hunting and this forbidding clause shall be punished.

5.The possession of a special permission for hunting, the entering of an attendant to a hunter and a visitor in the controlled hunting region mean unconditional acceptance and applying of the above stated.

This decision shall be published in State Gazette.

By order of the General Secretary

Director of Forestry of Messinia


I, Addison Abigail sertify the authenticity of the translation performed by me from Greek to English language of the attached document.

This hunt is good until trophies are taken or wounded or two reasonable chances have been missed or passed over up to a maximum of 3 days.

No refund will be applied if hunt started.

The only legal hunting weapon in Greece is open sight /no optics/ smoothbore barrel shotgun /without rifling/ with slugs. And bow. Hunting is a popular pastime in Greece, mainly on the mainland and mountainous areas. Wild boar and woodcock are commonly hunted animals. Both a shotgun permit and hunting licence are required to hunt in Greece. A shotgun can be bought without a licence, but it must then be registered with the police. A shotgun permit must then be applied for within one month at the local Police station. Applicants must be at least 18 years old. The penalty for being in possession of an unregistered rifle or shotgun without a permit may be up to four months in prison. Only single or double barrelled smooth shotguns, with a rifle length over 1m and holding no more than three bullets are permitted. 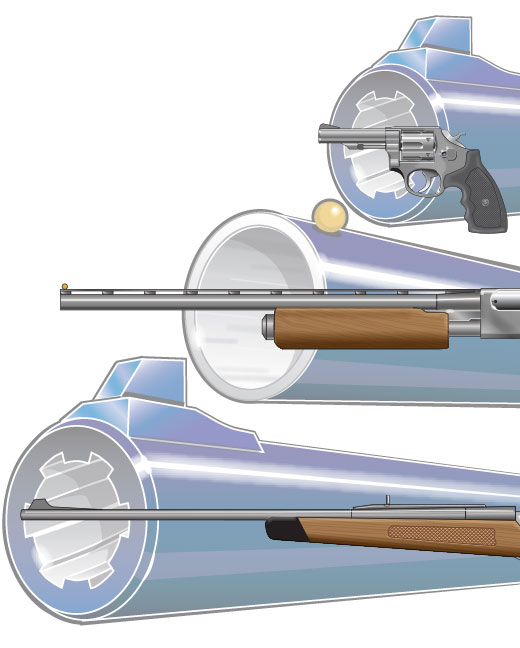 The main differences between rifles, shotguns, and handguns are their barrels and the type of ammunition used.